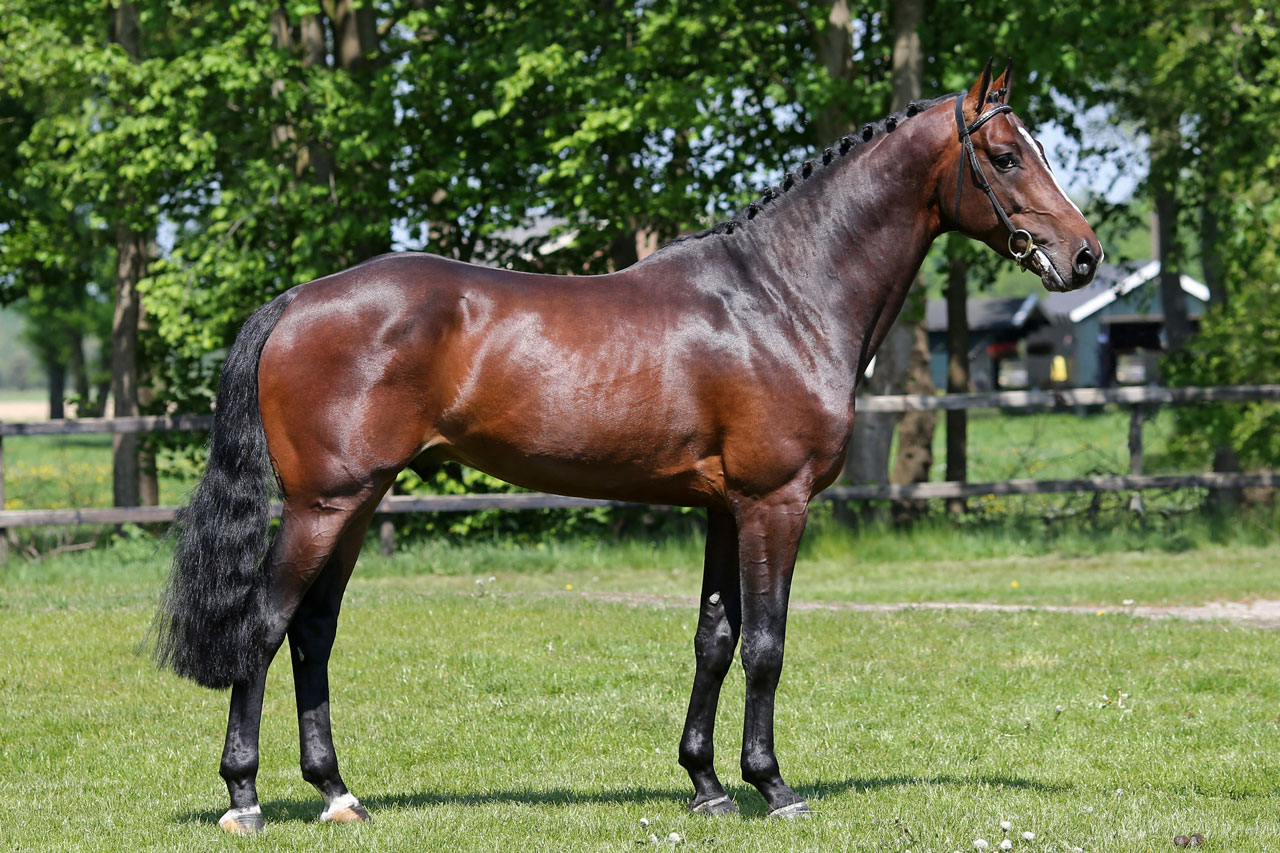 This beautiful conformation picture was made in the Performance Test at Ermelo, where Chapeau is participating. Chapeau is a beautiful stallion with the wonderful score of 103 for the genomics.

This future talent lives up to his name! The word chapeau is usually used to express appreciation or respect for an outstanding performances, and this 4yo BWP approved stallion delivers them time after time. With his powerful canter, scope and technique Chapeau is an excellent showjumping talent. That’s no wonder when we take a closer look at his strong Holstein origines. Sire Clearway was successful in several Grand Prix with Lars Bak Andersen and produced top horses like Glock’s Cognac Champblanc, Clarimo ASK, Carella 5 and Corino. Chapeau’s dam Vuttion VA is a half sister of the 8yo international 1.40m showjumper Cassons (s.Cassini II) of Alexander Hufenstuhl as well as multiple 1.30/1.35m jumpers. Granddam Malva II is a half sister of the Grand Prix stallion L’Eperon (s.Lord), who became champion of Germany with Carsten-Otto Nagel in 1999. Malva II is also granddam of the KWPN-approved stallion Charisma (s.Stakkato), who performed on international 1.45m-level with Julia Kayser and is now sold to the United States. Damsire is the international sport- and breeding stallion Quintero, who competed at three World Cup finals with Rolf-Göran Bengtsson and was victorious in multiple Grand Prix. His eldest offspring is already following in his footsteps, like the successful Grand Prix showjumpers Breitling LS, Quinto and Quibell 5. This leading Holsteiner damline 1463 is known for its many international sporthorses as well as approved stallions like Baldini I-II (s.Bachus), Carano (s.Capitol I), Lanciano (s.Landgraf I), Goodwill (s.Landgraf I) and Quality Time TN (s.Quantum).